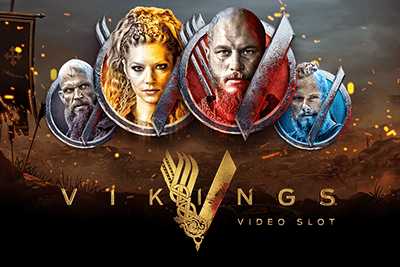 Vikings is a video slot from NetENT. Based around the hit show from The History Channel it features a wide range of features, huge numbers of paylines and high volatility. It combines this with one of the biggest maximum wins outside of progressive slots to give players a huge incentive to play.

Vikings has a wide range of in game features which really increases the engagement of the game. It uses the 243 ways to win payline system very well to make it feel like that a win is always possibility. It looks just like an episode of the TV show which really helps with creating and immersive atmosphere.

The shield wall feature is a random base game trigger.  It places shields on the reels, which then reveal high paying symbols. This offers the potential for wins to be created from losing spins.

Vikings has a high volatility which means that it can feel like it takes a long time between wins. This is offset by the base game features which endeavour to make Vikings feel like a lower volatility game, while still maintaining the high wins that make high volatility so appealing.

Vikings has an RTP of 96.05% which is slightly below the market average.

The maximum wager of $100 means that a high rolling game is definitely an option if your bankroll supports it. With a minimum wager of $0.20 an option it also makes smaller bankrolls able to access the game. $100 a spin is a large amount and the maximum win of up to 10,000 times your wager means that a $40 wager would still provide a good potential win while needing less than half of the bankroll.

Vikings is a game that manages to capture the look and feel of the TV show perfectly. The gameplay is slick and despite the high volatility it manages to keep players engaged in the long term. The free spins feature does feel like it is almost impossible to trigger at times, but overall Vikings is one of the more balanced high volatility games out there. 4/5